I am no longer promoting TrafficWave. There is nothing inherently wrong with the system, but to me it feels like a very old system that needs an overhaul to its interface. It also seems to get no feature upgrades and doesn't easily integrate with any other tools.

So today, I HIGHLY recommend that you check out RocketResponder instead. At just $20/month or less, you also get unlimited lists and subscribers. It has a far better interface, a simple drag and drop HTML mail builder (or stick with simple text), and automatic e-mails to any list when you post a new blog. (Huge time saver.) It also integrates with other software through Zapier. And it gives you unlimited lead pages.

To be fair, though, let me highlight a couple points on each, as it's important to get the system that's right for you.

Both systems provide you with unlimited lists and subscribers. TrafficWave costs $17.95/month. RocketResponder is $16 to $20/month, depending on whether you pay by the month or several months at once.
​

TrafficWave has a nice feature built in called AdTracker, which is basically a URL shortener. Use this to see which links are clicked in your e-mails (or anywhere else).

RocketResponder doesn't have one of these, and in fact doesn't show you the links that are clicked in the e-mails you send. It just gives you a single number for how many total clicks you got from the e-mails that were sent:
​

However, this isn't a reason to choose TrafficWave because there are tons of AdTrackers with more features that are free. One of the most popular is Bitly.

There's another tracker I recommend even more, also free. It is part of a larger advertising system, but in short, this tracker does more than track clicks. It tracks UNIQUE clicks, "real" visits (go see what that means -- it's important), and surfing duration. It lets you optionally run an advertising bar (your own ad) across the top of any URL you send someone to. And you can choose to run some other ads as well, giving you credits to run YOUR OWN ads in other places. Of course you can use these for links in any e-mail system as well as in your blog, etc. Check it out here.

TrafficWave has an old but familiar interface for building e-mails. To me, it's ugly and not fun, but it's functional. Sorry I don't have a better image, but this is what I have from when I subscribed:
​

Now here is RocketResponder when you're writing just a text based e-mail. Besides the interface, there's something worth noticing: you can choose to have them send the e-mail a second time to those who didn't open it the first time. This increases your chance of having a good open rate on each e-mail sent. They ALSO give you the choice of sending immediately or at a set time, which is something I don't believe TrafficWave offers.
​ 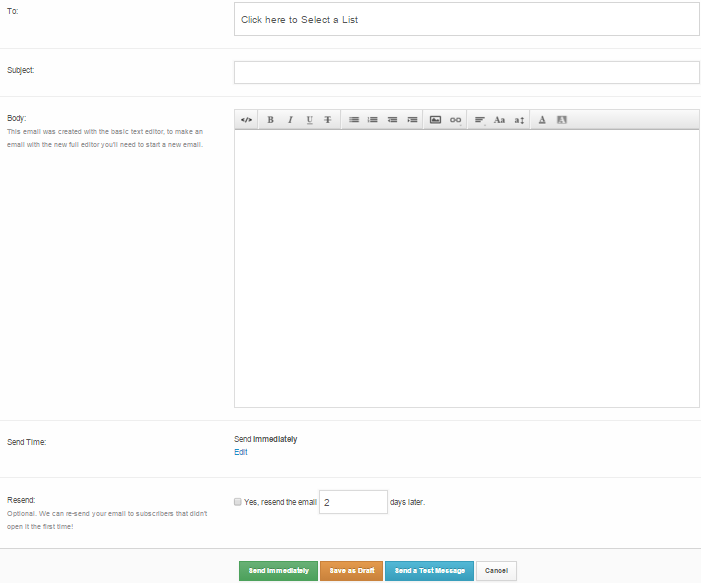 Now take a look here to see how easily you can send beautiful HTML e-mails with RocketResponder:
​

Sharing Autoresponders with Your Team

One of my favorite features in an autoresponder system is the ability to share what you've written with other people as long as they're using the same autoresponder system. So if you're in network marketing and want to help your team to succeed, you can provide them with e-mails to send by exporting your autoresponders to their account. They then just add their own referral links and signatures and they're set to go.

Another feature that can be really useful is campaign chaining. This means when someone's done with an autoresponder series of e-mails, you can automatically place them onto a different list, allowing you to automatically start the next series, or simply allowing you to e-mail them as part of a group that gets e-mails only after the initial series is complete.

Both TrafficWave and RocketResponder allow you to do this.
​

Given the information above, it's clear to me that RocketResponder is a far better value, and that's why I dropped out of TrafficWave. However, there is one attraction to TrafficWave that some people can't ignore: it has an MLM referral structure.

When you use TrafficWave (which is effectively your MLM "autoship," since it's a monthly expense), you can also refer it to other people. You can also get spillover team members from the people above you in TrafficWave, because it's build as a matrix, as seen in the image below:

As long as you've referred at least one active member, you can earn on several levels of referrals -- $6 on the 3 people directly below you (which covers your cost of membership) and $1 on the people further down. This structure lets them make it look like you can earn a ton of money, but this depends on getting people to join and stay. Since I think there are better mailing list values like RocketResponder, I suspect that this isn't easy. I didn't have an easy time of getting anyone to join myself.

If you do want to earn a residual income by referring a mailing list, RocketResponder also has a referral system, but only on your direct referrals. There is no multi-level structure. Your referral percentage depends on the number of people you refer.
​