In a world where we all know the economy is going digital, and where crypto currency has become incredibly valuable even though there are very few places to spend it ... Initiative Q is a really interesting possibility. Because something is going to become the world's future currency. We just don't know what it is yet.

Bummed that you missed out on buying Bitcoin for a penny (now worth $5000+)? Then read on.

I know, it sounds like something for nothing. Sounds like a scam and/or impossibility. But it's legit as a vision for something that could be worth a ton of money in the future ... and at worst will be worth nothing. Let me explain.
​ 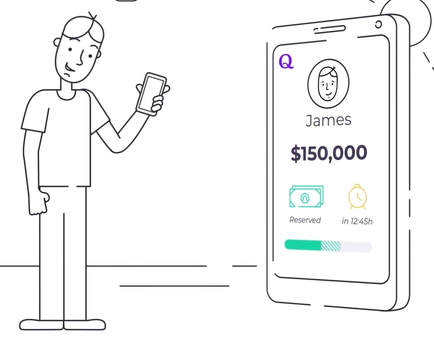 What is Initiative Q?

Initiative Q is a vision for a future, global payment platform that would simplify transactions and let anyone take part in the economy, including the many around the world that have no access to today's banking system.

Q is the name for the initiative's digital currency, but this is not crypto currency. There is no "mining" involved. It would instead work more like today's currencies, except that the "central bank" (the board determining how much Q is in circulation) would be voted in by the people and would be separate from the Initiative Q company. Its goal would be to ensure a steady value of Q against the changing needs for the population to spend money.

What Challenge Does It Overcome?
The initiative believes that the big challenge other platforms haven't overcome is getting enough people on board to bring merchants and people together. So they're giving away a LOT of Q to those who sign up now with just a name and email address as an incentive to build the network of users first. (So to be clear ... nothing to buy here.)

The founder was among the many developing payment solutions in the early days of e-commerce, when people thought you wouldn't expose your credit card to merchants online, and a different option was needed. He said a lot of great solutions were ultimately ignored because buyers didn't want to use what isn't accepted; and sellers didn't want to accept what no one is using.

Makes sense. And so ... build the network of people, then build the platform under proven demand. Some would say this is backwards, but others have tried building the platform first and we haven't gotten very far. So this is the Initiative Q approach.

That's why they're rewarding people for establishing the necessary demand. Your name and email address for a LOT of Qs, and even more Qs for sharing. I just strongly recommend you use a UNIQUE PASSWORD when signing up, as you should for every website. This way, in a worse case scenario, all you've given up are your name and email, which are honestly already out in the world.

What Could It Be Worth One Day?
Their goal is to become a major payment platform around the world. If this happens, trillions of Qs per year will pass through their system and each Q, at that time, could be worth plenty. Their goal is to match the value of a US dollar. So if they reach their goals, just signing up could be worth $3000+ to you. Sharing, you could earn much more. (These amounts drop as more people join.)

Is that realistic? Yes. Is it likely? No.

It is their vision. And in my mind, it may require the right kind of government backing and certainly needs a usable platform that somehow just has that magic of those companies that catch on. No telling whether Initiative Q will become a major platform.

How Can They Give Away Thousands of Dollars Per Person?
If I offered you one Bitcoin several years ago for providing me your email address, it might have cost me one penny or less. Today, that same Bitcoin would be worth $5000+. Bitcoin has become valuable because people believed that it could have future value as a trading platform. A similar thing is going on with Initiative Q. So they're not giving away thousands in current value. They're giving away what they hope will one day be worth a lot to you if the platform succeeds. Kind of like shares in a startup company.

Bringing in millions of people who share a vision of this becoming a reality potentially attracts investors and potentially creates a lot of value for the owners of the company as well. By joining, you are actually providing a service. And by being on the ground floor, you're in a position to score big if the company takes off.

What's It Worth Today?
Today, the platform doesn't exist. Qs are not worth anything. Their goal is to attract tens of millions with their incentive program by mid-2019 and to launch the platform by 2021. So some patience is required, along with a realistic view. To maintain the value of a Q, the currency will be released slowly rather than all at once.

Is There Any Downside or Risk?
Again, in my view, your name and email address are already out in the world. I don't feel providing them to yet another company creates any inherent risk. Just make sure you use a unique password, as you should for every website. The people behind this look legit. The privacy policy is solid. But as you know, it's just common sense not to reuse passwords.  :)

All that said, if you want to climb aboard the neat-idea-that-might-never-happen train, it's only available by invitation, because they rely on people verifying their referrals to make sure real people are signing up. My invitation link has expired so you'll need to seek them from others if you're interested to join.